In Orhan Pamuk’s novel, My Name Is Red, set in Istanbul in the 1590’s, two miniaturists are discussing Venetian art and its ‘realistic’ depiction of reality, how it aims to show things as we actually see them. The book captures a crucial time for their traditional art of ink painting as the Ottoman culture confronts the influence of the European renaissance. One of the artists reassures his colleague by telling him, ‘but we draw what God sees’. This notion of the gaze of a deity suggests a way to view reality that goes beyond direct perception, that can perceive noumena – Kant’s ‘Ding an Sich’ – things not as they look but as they actually are. To contemplate the notion of a God-like view is to get the sense of a gaze that is omnipresent, that can see everything at once in profound detail, but simultaneously perceive the unique quality of any moment. We should go further, to realise that each detailed part would not be perceived separately, this way of seeing would perceive everything as complete whole even in its infinite complexity. The diversity of the subject matter of the films of João Maria Gusmão and Pedro Paiva suggests that what is at stake here is not a particular subject at all, but a way of seeing. The exhibition/work Papagaio includes an array of films projected simultaneously in the same room (or several rooms, depending on the installation, along with a cinema to show a single longer film and some camera obscura). The films are projected onto all four of the walls, in different sizes, the centre of the room itself is filled with the projectors on plinths of various sizes and heights, some designed as ‘L’ shapes to provide seating. Although the films are silent, the whirring of the projectors provides its own rhythmic soundtrack. Some scenes: the side of man’s head as he walks, cigarette in lips, in front of buildings; two raw eggs in a pan, seen from above; a sun over the sea, seen from a cave; a live fish, sat on a plate, moving its fins; a tonsure being shaved into a man’s hair. There is no explicit connection between the images, but with attention some possibilities emerge: circular forms; varieties of animals; locations that may be tropical, perhaps islands or Africa. The films are shot high speed, then played back in slow motion, the result is that a viewer is immersed in a position of ultra perception – we can watch single drops of rain running down a windscreen, we can enjoy the slow flapping of a parrots wings, turning from one image to the other, taking time to compare compositions and forms even as they move all around. However the view that ‘Papagaio’ gives us feels strangely restricted and passive. The people in the films take no notice of the camera: the viewer seems absent. The view point is usually fixed (or fixed to a moving object, like the dashboard of a car). It is the view from an out of body experience, as in an overly realistic dream we see much more that existence allows us, we are passive, disengaged, trapped even, but we are fascinated to the last detail.
Paiva and Gusmão provide a contrasting experience with their camera obscura installations that also form part of Papagaio. Here, real objects are projected directly onto the wall using only a hole and a lens, one camera obscura uses (the classic Duchampian objects) cycle wheels, another depicts a winter scene using cut card. Real found objects are turned into illusion, and an illusionary scene is made to seem more real, as if it were a view from a window. Paiva and Gusmão present one way of perceiving the world through their films, the contrast this with the complexities of our direct perception – whichever way of seeing and depicting is chosen, the illusionary is inescapable. 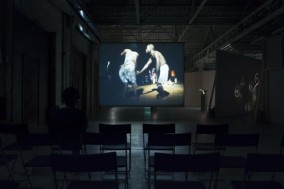 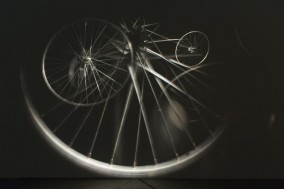 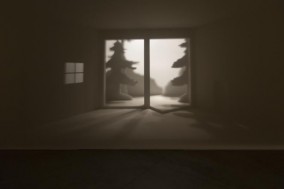 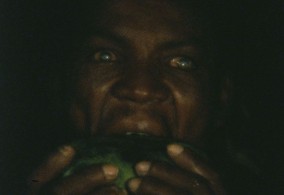 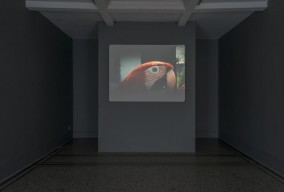 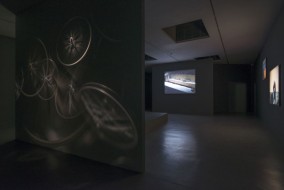 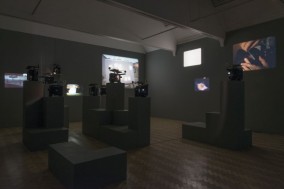 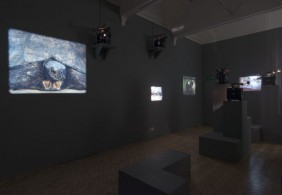 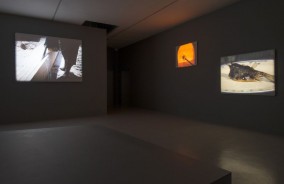